The first cycle tracks in Kilkenny were provided in 1995 on the Grange’s Road and the Castle Road to accommodate the local school going population.

Further provision for cyclists and for pedestrian improvements were provided on Pennefeather Way (from Newpark Shopping Centre to O Loughlin road)and Garringreen in 2004/2005.

Progress in past 5 years

The first phase of the River Nore Linear Walk was completed in 2009. Measuring 2.5 km long it connects the weir on Bleach’s Road to the rear of Riverview Drive just north of Green’s Bridge

Further work on the linear walk was completed from Lacken Weir on the east bank of the river and also on the Canal walk area adjacent to the Castle grounds.

A new elevated boardwalk was completed in 2011 connecting the Ring Road at Ossory Bridge to Maudlin Street. The completion of this project in 2011 provides recreational walkers with 5km of urban style walkway in a peaceful riverside environment. 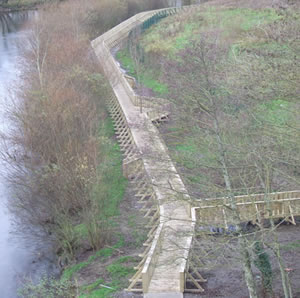 View of new board walk from Ossory Bridge on Ring