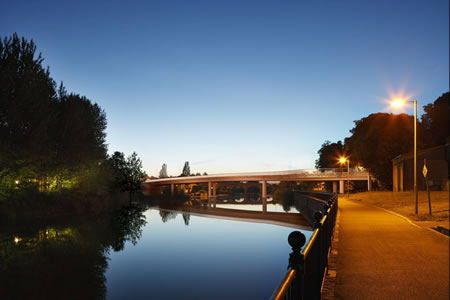 Kilkenny County Councils submission under section 146A of the Planning and Development Acts - Decision of An Bord Pleanala.pdf (size 44.5 KB)

Response by the Acting Chief Executive on the Section 140 Motion

Press Release: Council Chairman calls for an end to protests at Greensbridge

Summary of preliminary findings to date at 21 & 22 Vicar Street

EIS May 2008 (this document was subsequently revised.)

Q. What will happen to Green's Bridge?
A. The new bridge will take a lot of traffic off Greensbridge, an old structure that was built in 1776 and is not capable of taking the volume of traffic currently crossing the bridge. A local traffic management plan will be put in place for Vicar Street and Greensbridge aimed at making the area more pedestrian and cyclist friendly.

Q. What level of public consultation has taken place?
A. The level of communication is documented in the Environmental Impact Statement. This is summarised below:-
19th June 2007, Information meeting for residents of Wolfe Tone Street
12th September 2007, Public exhibition in City Centre Hotel
11th September 2007, Members of Kilkenny & Borough Councils
1st & 2nd December 2008, Oral Hearing Ormonde Hotel
The full EIS and drawings have been accessible to members of the public on the Borough Council website since January, 2011.

Q. Will the KCAS sever the Irishtown district from Hightown?
A. No. Dean Street will remain exactly as it is at present. The new street commences near the entrance to the Diageo car park at St Canices Place. Owing to its inclusive design that caters for cyclists and pedestrians it will make the St Canices quarter more connected and accessible.

Q. Would it make more sense to complete the Kilkenny Ring Road to the West of Kilkenny?
A. Kilkenny County Council has for the past six years been planning and developing the design of the Freshford Road to Castlecomer Road extension to the Ring Road. The Council expects to submit an EIS to An Bord Pleanala very soon in order to receive statutory approval to the project. The western extent of the ring road connecting to the Callan Road measures approximately 6km and costing over 30 million is simply not achievable at this time.
The Central Access Scheme is already partially funded, has full legal and statutory approval and is a scheme to serve the city centre. One of its main functions is to cater for the 80% to 90% of traffic generated internally within the city.

Q What impact will it have on archaeology and historic architecture?
A. The planned street will traverse mainly derelict industrial type sites. The route has been carefully selected to avoid if possible any known archaeology and this subject is covered comprehensively in the EIS for the scheme.
The conditions attaching to An Bord Pleanala approval and the subsequent licence obtained from the Dept. of Arts Gaeltacht and Heritage require the engagement of an Archaeologist on site at all time during the deconstruction of the terrace of houses on Vicar Street.
In addition the methodology for deconstruction will be agreed with the national Monuments Section and all works will be carried out under directions issued by the Minister of Arts Gaeltacht and Heritage.
Test trenching carried out in the summer of 2012 along the route of the street has not revealed any archaeology of note.

Surveys and investigations by consultant archaeologists

Surveys and investigations by consultant archaeologists Valerie J Keeley Ltd and architectural and historical buildings specialist Mr Rob Goodbody, of Historic Building Consultants, are continuing on the gable or end wall of No 22 Vicar's St under licence and supervision of the Dept. of Arts, Heritage and the Gaeltacht.
This wall is on the line of a planned footpath for the proposed Central Access Scheme and is parallel to the line of the proposed new street.
In a major undertaking, all render has been removed from the three houses at Vicar Street to ensure that a full and detailed survey will inform the dating of the structures.
At this time there is not sufficient evidence to definitively date the gable wall at No 22 Vicar's Street. Substantial portions of the wall are modern and the architectural building survey and archaeological investigations currently underway will inform this process
To date there is no substantive evidence to support the view that these remains represent a 'Manse House' for the Prebendary of Tascoffin. Indeed at this point research indicates a move away from this theory.
It is clear from the extent of the ongoing investigations being conducted at the site, that the utmost consideration has been and is being afforded these structures.
The study currently being undertaken for the Council at Vicar Street is a designated process of in depth research, surveys and investigations. This work is under licence from the Dept. of Arts, Heritage and the Gaeltacht, under Ministerial Direction and in line with An Bord Pleanala requirements.
Kilkenny County Council wish to continue this process to its conclusion within the context of our already established commitment to and respect of our heritage in Kilkenny City and county.

Naming of New Bridge on the River Nore

Comments are invited on the shortlist

Council Statement on Removal of Four Trees at Peace park

KCLR Radio Interview with the County and City Manager, Joe Crockett regarding the Central...